CPO Conference Follow Up: The Origin of Certified Vehicles

This past Monday, I delivered the key note speech at the First Annual Certified Pre-Owned Conference sponsored by AutoRemarketing Magazine. The conference was held in Dearborn, Michigan and was attended by most every manufacturer’s highest ranking CPO executive. Each manufacturer recognized its top performing CPO dealer for calendar year 2007. It was an impressive demonstration of the significance of used vehicle certification in the retail automobile industry. 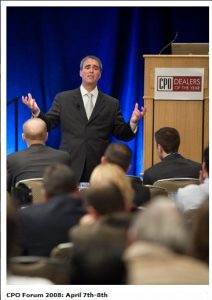 My speech began by challenging the audience to tell me when vehicle certification came into existence. I got several responses, ranging from 8 to 35 years. I also asked the audience who they thought was the first manufacturer to introduce certification. I heard many manufacturers’ names, most notably Toyota and Lexus. I then asked Ashley Antonio, the Certified Pre-Owned Manager/Internet guru of Paragon Honda, Honda’s No. 1 Certified Pre-Owned dealer in the nation, to read the following passage from a book that I held in my hand: “Some companies and dealers have established certain policies to insure fair dealing. For example, certain cars, usually the make handled by the dealer, are certified. That is, they are placed in such condition that the dealer can guarantee their performance for a given period just as a factory guarantees a new car”. I then revealed that this book was entitled “Marketing Used Cars” written by Paul G. Hoffman and published in 1929

Later in the conference I received some feedback suggesting that Hoffman’s use of the certified word may have been correct from a dealer’s perspective, but did not necessarily answer the question as to which manufacturer was the first to create a certified program. One particular CPO executive reminded me Ford had A#1 Used cars, Chevy had OK used cars and Studebaker had an ad that talks of Studecare used cars back from the 50-60’s. This information, in fact, raised genuine doubt in my mind as to who was the first manufacturer to use the “C” word.

Two days later, while having lunch with Mark Webster, the Certified Pre-Owned Manager of Mercedes-Benz USA, we discussed this issue. He told me of a Studebaker ad dating back to the 1950’s which touted the benefits of the certified program. Take a look at this Studebaker Commercial and tell me what you think. Unless anyone can come up with documentation that pre-dates this ad from the 1950’s, I think that the mystery is now solved.

In any event, I’d like to take my hat off to all the manufacturers that put resources behind this important program as well as AutoRemarketing Magazine for establishing the CPO Conference. As I stated in my speech, I think that the salvation of the retail business in the coming years depends on the success in both the used vehicle and fixed operation departments. Certification is the perfectly tailored program that enhances a dealer’s used vehicle sales and service departments. What could be more appropriate for this challenging moment in the retail automobile business?

There is, however, a very significant threat on the horizon that challenges the viability of certification. The threat comes in the form of claims that vehicles are “certified” when, in fact, they do not meet the requirements of the formal manufacturer’s certified program. What I’m talking about is the threat posed by independent dealers, and even a small number of franchise dealers that call their vehicles certified without being certified by their brand manufacturer. Vehicles that don’t meet the standards or bare the cost of real certification devalue those vehicles in the market that do. The losers are both the dealers who invest money to achieve genuine certification as well as the consumers who buy them with an expectation of having a factory backed warranty. Moreover, the manufacturers also lose because anything less than true certification does not achieve the objective of supporting the brands residual value and customer satisfaction objectives.

The word certification in our industry today, unlike 79 years ago carries a connotation of factory sponsorship. To allow claims of certification without official or factory endorsement serves only the interest of those retailers who would like to turn the hands of time back to the unscrupulous days that Hoffman describes in his manuscript of 1929. I’m calling for your comments and views on this issue so that we can make a case to NADA, state associations and manufacturers to impose ethical standards on the use of this very important term “certification”. These programs are critical to dealer survival and must be vigorously protected. Please tell me what you think and forward a link to this article to everyone you know that has a stake in the viability of our business.