Here’s a great question from an outstanding Velocity dealer. 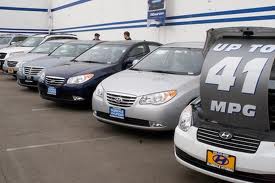 Dale- Given the deflationary wholesale market that we’re probably going to see over the next couple of months what are your thoughts about holding onto vehicles longer/waiting to wholesale them until dealers tell their used car managers in late December/January to “go get me some used cars”? Normally I wouldn’t consider this, however, given supply constraints with fewer off lease vehicles/rentals next year prices will most likely start to increase (again, until they abut new vehicle prices). I ask this, in part, as a general question, but am also concerned about some aged units at my Hyundai store. These units are priced right, merchandised well, and, in some cases, have low days supply. However, one common theme is higher miles, which is most likely why they are being overlooked online. I simply don’t want to take a bath now when I very well could end up making some money in a couple months (or retail them between now and then).

Let me know your thoughts and thanks!

C – While I understand the rationale, I hate the idea.  As you know I routinely advise dealers not to speculate with respect to inventory values.  Although I might agree that wholesale prices will rebound late in the year or in the beginning of next year, none of us know for sure.  We live in volatile times and I’m convinced that trying to predict the future is about a 50/50 proposition at best.

Let’s assume for argument purposes that you’re right and values do come back.  Do you think your next few months of sales are going to be good when your sales people are looking at the same old vehicles?  There’s an intangible and psychological effect about keeping the big wheel turning.  Your dealership has developed all sorts of disciplines about fast turn and to take a speculative time out, in my judgment, sends the wrong message to the organization and sets you back.

I would rather see you deal with your current reality without sacrificing your principles.  Take your current loss and learn from it.  Just move on.  It’s an unrealistic expectation to think that you can run a vehicle sales business without taking some losses from time-to-time.  Remember, that if you simply adhere to your Velocity plan, when all the dust settles, you will have won more than you lost.