One of the coolest things about my job is quick access to a lot of really smart people. When I have a question that requires industry-level data, help is only an e-mail or phone call away.

I used this privilege the other day after talking with a dealer about a gross profit problem in used vehicles. The dealer didn’t think his average $900 front-end gross profit was enough.

After checking his inventory metrics, I explained how the relatively high costs to acquire a car, combined with his reconditioning and pack amounts, were crimping his front-end margin when he priced his used vehicles to the market.

I also noted that he would do well to focus on reducing the negative margin strains these add-on costs created for every car—steps that many velocity dealers have taken to improve their front-end margins. The dealer then asked me for industry stats on dealer margins.

That’s when I pinged Juan Flores, the head of vehicle valuation at Kelley Blue Book. I asked Juan for data to highlight the typical margin between auction purchase prices and retail asking prices. He/his team tracked 178,000-plus cars by VIN from their sale at Manheim auctions to their online listings so far this year. They normalized the data and cut it by vehicle segments.

The data shows that, on average, dealers see a $3,400 average spread between the acquisition and retail asking prices of their used vehicles (see chart). This is the margin that covers acquisition/transportation, reconditioning and any packs, and drives front-end gross profit. 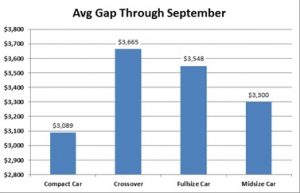 I took the data back to my dealer.

Out of the average $3,400 margin, we subtracted the dealer’s average $1,150 in reconditioning/transportation costs and the $750 pack he applies to every used car. That left $1,500 for front-end gross profit. Next, we subtracted his best guesstimate of the average discount given to customers, which he pegged at $600.

Not surprisingly, our math roughly equaled the $900 front-end gross profit the dealer had called me to complain about.

“Do you see how your reconditioning costs and packs are a problem?” I asked.