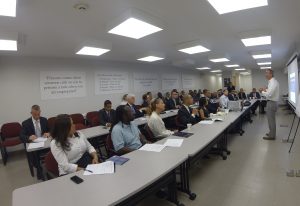 Last Friday I had the privilege of conducting a mid-year review with the management team of Paragon Honda, Paragon Acura and Honda of White Plains, New York. All three of these dealerships are under the management and control of Brian Benstock. My experience with Brian and his management team on both Friday and Saturday were extraordinary life events.

Okay, how can a business meeting with a dealership group be an extraordinary life event? Well, the answer is for several reasons. First, it starts with the experience of knowing and working with Brian Benstock. At so many different levels, Brian embodies qualities to be both admired and respected. He has the ferocity and determination of a lion, and at the same time, possesses the intellect and sensitivity of a scholarly priest. In other words, he operates with deftness at a wide range of human, social and intellectual levels.

Brian’s extraordinary qualities are exemplified by the appearance, professionalism and performance of his dealerships and personnel. An outsider of New York approaches the dealership in Queens with the weariness of one entering an urban jungle. Crossing the threshold of the dealership’s front doors, one’s environment is transformed from an uncertain chaotic environment, into one of orderly activity. The facilities are immaculate, the personnel are friendly and professionally attired and one gets the clear impression of a well-executed Broadway performance. There is an upbeat energy in the air that defies the outside physical environment. One immediately knows that they’ve entered a special realm.

The meeting with Brian’s team was equally as motivating. Although I met many new people, I was warmly greeted by dozens of managers with whom I’ve made acquaintance over the 8 years of our relationship. The team was willing to accept my challenge to raise their game to an even higher level. Unlike many such experiences, Brian’s team eagerly accepted constructive criticism and the challenge to do even better. Unlike so many dealerships, Brian’s personnel are humble and eager to change. These qualities are all the more impressive in light of their clear dominance in new and used vehicle sales on a national basis. In short, one could not ask for a better team than Brian has assembled in the Paragon and White Plains organizations.

The most extraordinary experience of my visit this past weekend occurred on Saturday when Brian invited me to run with him through Central Park. So what made that experience so special? Well, let’s start with the fact that Brian, at age 53, is a marathon athlete capable of running 26 miles at approximately 7 minutes per mile. As if this wasn’t intimidating enough, I accepted Brian’s invitation with great reservation considering the fact that I can’t see. Although I love to run, I’m not capable of running at Brian’s level, nor was I comfortable running in an unfamiliar and crowded environment like Central Park. I repeatedly tried to decline Brian’s invitation to run, but he insisted that I accept.

Well, I have to say that it was an experience of a lifetime. The day was perfect, not too hot with a sunny blue sky. We agreed that we would run the 4+ mile loop around the northern end of the park. Brian gave me repeated assurances and confidence as we approached the park. I imagined everything going wrong, including not running fast enough, bumping into other runners and cyclists, and most frightening of all, the potential of injury to myself or others.

As we began to run, I immediately realized that I was in a good place and company. From my initial strides, Brian began a constant stream of communication, informing me of terrain, traffic and surroundings. While I couldn’t see much in the bright sunlight, I could see absolutely nothing in the frequently shaded areas of the track. I quickly discovered that I was running with complete blind faith in Brian. I think it’s fair to say that very quickly, Brian and I achieved a mutual understanding that we were running as one. Quickly my fear and inhibition melted away in favor of a sense of freedom and overwhelming emotion of joy. Moreover, my excitement was even heightened by the clear sense that Brian was enjoying the experience as much as me. I was completely in his hands, and he was completely in control, and together we were sharing an experience of a lifetime.

The rest of the day and weekend, and in fact, currently as I write, I cannot stop smiling when I think about the experience that I shared with Brian at both his dealership and in the park. I’m truly privileged for the relationship, experience, knowledge and friendship that I have derived from Brian. He is truly a treasure.