Another Similarity Between Dealers And Family Farmers—Technology

About 15 years ago, I purchased a farm in Northwest Illinois, where I became a USDA-registered farmer. I had more than just a financial interest in the operation, as I was fascinated with the ways my partners planned and worked the land to produce corn and soybeans.

I thought of those days over the weekend 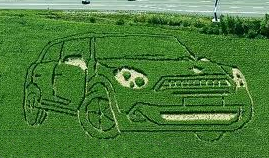 Take the opening lines from the Times article, titled “Working the Land and the Data:”

“I’m hooked on a drug of information and productivity,” he said, sitting in an office filled with computer screens and a whiteboard covered with schematics and plans for his farm’s computer network.

Mr. Tom, 59, is as much a chief technology officer as he is a farmer. Where his great-great-grandfather hitched a mule, “we’ve got sensors on the combine, GPS data from satellites, cellular modems on self-driving tractors, apps for irrigation on iPhones,” he said.

…But for farmers like Mr. Tom, technology offers a lifeline, a way to navigate the boom-and-bust cycles of making a living from the land. It is also helping them grow to compete with giant agribusinesses.”

As I read this article, I couldn’t help but think of how much farming has changed since the not-so-distant days when I would occasionally ride along as my partners would harvest or plow our fields.

I also thought of how much data and technology have changed the car business. I recalled countless conversations with dealers who, like farmer Kip Tom in the article, have come to rely on data-based insights to achieve the level of efficiencies and profitability today’s challenging automotive retail environment requires.

The piece goes on to highlight how some tech-savvy family farmers are taking their competitive advantage to the next level, expanding operations while their tradition-minded neighbors struggle to survive—a dynamic that’s familiar to most, if not all, dealers.

As I finished the piece, I realized that the same essential story could appear in any automotive industry publication, albeit with a different headline: “Working the Deals and the Data.”