In its 2014 report on dealership financial performance, the National Automobile Dealers Association (NADA) highlights a disturbing trend in used vehicles.

The NADA report notes that franchise dealers enjoyed a 6 percent increase in used vehicle sales compared to 2013—an increase similar to what dealers saw in 2013, compared to 2012.

Yet, net profits for used vehicles declined last year, which leads to a key question, “What gives?”

To answer the question, I took a deeper look at the data from 2012 to 2014. I found two data points that help explain why dealers are selling more cars and making less money:

1. Dealers relied more on auction purchases in 2014 than they did in the prior year. NADA reports auction units made up 26 percent of used vehicle acquisitions, while trade-ins remained relatively flat year over year. In 2013, auction cars fed 25 percent of deale 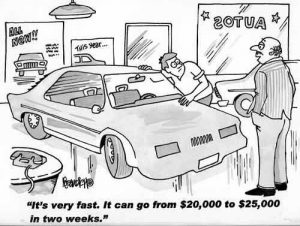 2. Dealers continue to sell more expensive vehicles. In 2014, the average sales price of a used vehicle ran $18,846 up 4.1 percent from the prior year. The increase marked the fifth consecutive year where the average dealer investment in a used vehicle increased.

Some of you may be thinking, “Thanks, Dale. You’ve just re-stated the obvious. We all know it’s tough to acquire the cars we need at a price that provides sufficient front-end margin.”

But , in light of a market where you can’t source all the used cars you need at your door, and you’ve got to pay more than you’d like to buy units for elsewhere, here’s the question dealers should be asking: What are we doing to retail these units faster to maximize profit and minimize risk?

Unfortunately, the NADA data suggests most dealers aren’t asking this question. I say this based on evidence from dealers who do ask the question, and do so diligently. These dealers beat the NADA averages. Their used vehicle net profits have increased in recent years, and keep getting better.

Know your opportunity/risk right away. The dealers recognize that the more they can know about a vehicle’s retail potential before they acquire it, the better. By evaluating each vehicle’s Market Days Supply and Cost to Market metrics, the dealers know pretty well, if not precisely, how their investment in the vehicle will perform. With this knowledge, the dealers plot the best retail exit strategy that will maximize front-end margin and minimize losses. It’s also not uncommon for these dealers to have more aggressive retail exit plans for auction cars, given the cost/margin challenges these vehicles pose in today’s market.

Press down your days-in-inventory average. I would encourage every dealer to conduct a two-pronged test of their past three months of used vehicle sales. First, assess the front-end gross profit and return on investment (ROI) for each sale. Second, segment the sales by days in inventory. If you’re like most dealers today, you’ll find that most, if not all, of the units retailed after 30 days performed significantly worse than those sold in less than 30 days. I suspect you’ll also find the bulk of your break-even and money-losing deals occurred after the 30-day mark.

Top-performing dealers accept this 30-day reality. They approach it like investors. They know they have 30 days to maximize the margin/ROI on every car and, if a unit is/becomes especially troubled, they’ll work even faster to retail the unit and redeploy the investment dollars in a vehicle with better potential.

I encourage dealers to maintain at least 50 percent of their used vehicle inventory under 30 days of age at all times. Anything less, I’m afraid, means you’re under-cutting your department’s net profit potential.

Source more cars in your store. In addition to showing that dealers relied more on auction vehicles in 2014, NADA stats indicate that dealers acquired more trade-ins from new vehicle sales (42 percent compared to 41 percent in 2013), while getting fewer trade-ins from used vehicle customers (24 percent compared to 25 percent) and off-the-street purchases (4 percent, 5 percent, respectively).

You could read these stats one of two ways: Dealers saw fewer retail-worthy units from used vehicle trade-ins and off-the-street purchases, or they did a better job acquiring cars from new vehicle buyers, while letting other in-store acquisitions slip.

Either way, the stats indicate dealers are probably missing cars that, if acquired, would offer better margin/ROI potential and reduce the reliance on auctions.

In a year from now, it’ll be interesting to review the NADA data for the current year. In particular, I’ll be curious to see how well dealers have reversed the trend of selling more used vehicles and making less money.