But packs have become increasingly problematic for dealers, sometimes in ways they fail or refuse to see.

I recently asked a group of dealers to share how much they packed their used vehicles. The responses ranged from $0/per car to $1,200/car.

I then asked the dealers at the low and high end for additional details: 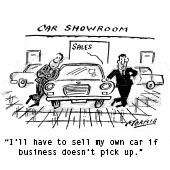 Average sales associate pay/production: The $0-pack dealer pays an average $275 flat for each sold unit ($300 for cars sold at asking price; $250 if they’re discounted), and sales associates average 15 cars/month (or $4,675/month). The $1,200-pack dealer pays a straight 25 percent commission off of gross (minus pack), or a $150 mini for no-gross deals. The sales associates typically sell 10 units, which usually includes an average of three mini deals (or $3,250/month). This dealership also pays $50 spiffs for selling aged cars and F&I sales, which the dealer estimates adds another $300 or so to a sales associate’s paycheck.

After running through these numbers, I went a little deeper. I asked about average sales team turnover. The $0-pack dealer might lose one, maybe two, sales associates a year; the $1200-pack dealer loses about half of his team.

With this comparative backdrop, I asked the group if they thought the dealer’s $1,200 pack might be crimping his ability to increase market share and sell more used cars.

Some dealers immediately said “yes.” They pointed to the dealer’s relatively low monthly sales volume, slower inventory turns and higher turnover as evidence that the $1,200 pack contributed to a less-than-optimal performance for the used vehicle department and dealership as a whole.

Other dealers cried foul. It wasn’t a fair comparison. The dealers had different markets and operating philosophies. Besides, even if things could be better, the $1,200-pack dealer has every right to “protect the house.”

I asked a follow-up question: If the two dealers were competing in the same market, which dealer would more likely enjoy a higher level of market share and overall profitability?

At this point, all the dealers in the group at least acknowledged that the $0-pack dealer would likely be selling more cars, and making a better return on investment.

I then shared the three reasons I believe packs create trouble for today’s dealers:

As we wrapped up the discussion, I asked the $0-pack dealer how he arrived there.