NADA Day 2: A Few Firsts From The Floor

It was a lively, long day on the exhibit floor at NADA on Friday.

A dealer joked, “Dale, I heard things weren’t going so well, and that you’re selling socks at NADA this year.”

The truth is, I was giving away Stockwave-themed socks as part of our launch of the innovative wholesale sourcing solution. I handed out dozens of pairs to dealers who stopped by the Stockwave and vAuto booths. 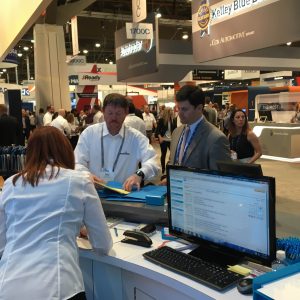 The give-away highlighted our belief that Stockwave would knock the socks off of dealers who saw it.

It didn’t take long to ink the first Stockwave deal. Soon after the exhibit hall opened at 8:30 a.m., dealer Chase Smith of Houston-based Russell & Smith Automotive earned the honor of being the first to sign up here for Stockwave.

The deal was one of several firsts that occurred during opening day on the exhibit floor:

I’m looking forward to what Day 3 at NADA will bring. See you on the floor. #justturniton