Those were the words running through my mind after speaking 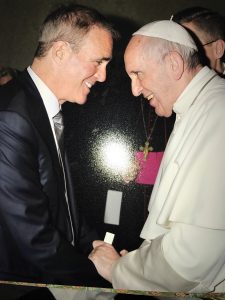 Thankfully, I woke up this morning with a clear idea of what I would say to the leader of the world’s largest faith.

“Your Holiness. I want to thank you for the light that you bring to our world. I want you to know that I’m an American citizen and I’m very concerned. As an American, I’m very concerned about the hate, and the speech of hate, in our country today. Your Holy Father, what I would ask you to do, is to use your voice to speak out against the hate in America.”

Pope Francis then took my arm with both hands and held it firm. He leaned his head into my chest. He said a prayer, his head moving up and down.

“He’s praying for me and my country, and he’s praying directly into my heart,” I thought.

I felt a sense of awakening. A connection. I understood in an instant that Pope Francis has a special gift—knowing how to reach, and touch, people in the most meaningful way.

Several members of our group asked me what I’d said. They had seen the Pope’s reaction. I didn’t really know what to say, as I couldn’t really say anything. The most magical moment of my life was still sinking in.

As we left the room, I said my own prayer of thanks—for the opportunity, for the compassion and grace Pope Francis shared with me, and for the knowledge that I’d been heard and for the peace I hope will come.