I really am blessed.

For most of the day and evening yesterday, my Facebook and

Twitter feeds were dancing from all the dealers traveling to Chicago for vAuto’s fourth, Access: Velocity event.

It’s a little like old home week here at the Peninsula Hotel. I’m hugging and shaking hands with dealers from across the country, some of whom were on the ropes nearly a decade ago, and now they’re worried about how to bring a newly acquired store up to speed.

The kids are here, too. I said hello to the sons of dealers who, not so long ago, were wearing jumpers and Velcro-strap shoes, and making it hard to hold a conversation.

Today, the kids are standing a whole lot taller and listening close. It’s pretty special to see the car business bug biting the next generation of dealers.

Beyond re-connecting with friends, there’s also a palpable sense of anticipation here at Access: Velocity.

To be sure, some of the anticipation owes to what we’ve promised attendees will get: Today, we’ll unveil a new way to manage used vehicles that goes beyond Velocity.

It’s a moment that feels eerily like the earliest days of vAuto—when dealers’ need for a better way of doing business, and the ability of a company like vAuto to offer it, came together.

Speaking of coming together, I couldn’t help but suggest that I grab a photo of three vAuto team members who are here for Access: Velocity. They work in separate offices and get together less frequently than the probably should. 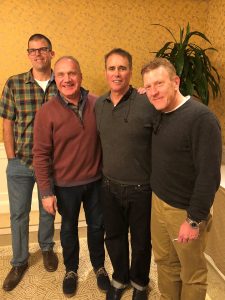 It was a unique moment for any company. We took the photo.

Even though we couldn’t come up with a clever caption, the moment didn’t pass without recognizing that if vAuto was a band, we wouldn’t have trouble filling the drum chair like Spinal Tap, and we’d need more space on stage than the Grateful Dead.